Women workers at a garment factory in Hainan, southern China, began a strike on Wednesday 11 November to press their demands on pay and vacations after management announced drastic cuts in bonuses. Around 3,000 workers at the Hainan Youmei Underwear Co., Ltd in Haikou City, the provincial capital, gathered outside the plant. The factory is wholly owned by German-Swiss lingerie giant Triumph International, one of the world’s leading manufacturers of women’s underwear.

“The strike started after the management said a worker could not get year-end bonus if her production efficiency failed to reach 50 percent of the average level last year,” Mo Xiaohui, a worker at the plant told Xinhua. “That was impossible for most of us as the production dropped sharply in the financial crisis.”

By Friday the company agreed to pay all workers their bonus, but workers decided to continue their strike over their other demands, Han Lirong, head of the firm’s official (state-controlled) union, was quoted as saying. Workers across China’s manufacturing sector, many of them migrants without job protection or rights to medical insurance and pensions, have suffered pay cuts this year as the global capitalist crisis has battered China. The government’s stimulus measures have helped save the rich, big companies and corrupt officialdom, but have not benefited factory workers and the poor.
“Now we have to go on strike as we have long been asking the company to accept our demands,” Mo said.

In addition to protesting over the threatened cut in bonuses, the Triumph workers are demanding the company raise wages to the minimum national standard and provide employees with normal levels of leave. Huang Xueyan, the company’s personnel manager, said the negotiation was hard as workers would not select representatives to talk with the management. This is not surprising! It just shows the difficulties facing workers during labour disputes in China, where genuine independent trade unions are outlawed. The Haikou workers have undoubtedly decided not to put forward individual representatives for fear of victimisation by the company or by the state – on grounds that their strike “undermines stability”.

Triumph International, which has its global headquarters in Switzerland, had an annual turnover of 1.6 billion euros in 2003, with 38,691 employees in 120 countries. The company is no newcomer to accusations of labour abuses and union-busting. In June this year it closed down two factories in the Philippines and halved its Thai workforce as part of a global ‘restructuring’ plan. The moves were widely seen as a ploy to smash the unions at its operations in these countries. Earlier this year, the company’s wholly-owned subsidiary Body Fashion Thailand, dismissed union president Jitra Kotshadej for taking part in a national television debate wearing a t-shirt with the text ‘Thinking differently is not a crime’.

Workers from the Philippines and Thailand units of Triumph International, supported by Hong Kong trade unions and migrant groups, staged a protest in August 2009 outside the company’s offices in Kowloon Bay, Hong Kong. They were protesting about Triumph’s closure plan with the retrenchment of 1,663 workers in the Philippines, and the loss of almost 2,000 jobs in Thailand.

“When it comes to profit, Triumph International is so fast to extract wealth from us but when it comes to obligation and responsibility, they are now running away.” Isabelita dela Cruz, a spokeswoman and union representative from the Philippines. “We cannot wait for any longer because our families and children in the Philippines and in Thailand are suffering and live in miserable condition. Many of our children stop schooling and soon we will be ejected from our homes.” 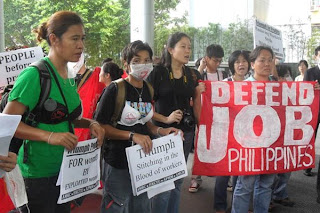 chinaworker.info is appealing for international support and solidarity for the women strikers in Haikou. They are pitted against a notoriously exploitative company and fighting courageously under a political regime that bans strikes and often resorts to severe repression. Solidarity action could include sending letters, faxes and emails of protest to the company (address below) or staging protests outside company offices or stores selling Triumph underwear.

chinaworker.info gives its permission for this article to be reproduced and used as an information leaflet in connection with solidarity action.