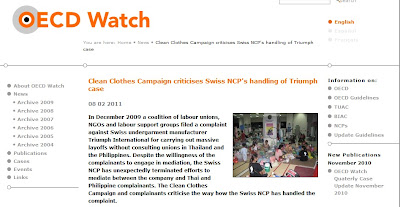 In December 2009 a coalition of labour unions, NGOs and labour support groups filed a complaint against Swiss undergarment manufacturer Triumph International for carrying out massive layoffs without consulting unions in Thailand and the Philippines. Despite the willingness of the complainants to engage in mediation, the Swiss NCP has unexpectedly terminated efforts to mediate between the company and Thai and Philippine complainants. The Clean Clothes Campaign and complainants criticise the way how the Swiss NCP has handled the complaint.

In August 2009, nearly 2,000 workers were suddenly retrenched at Triumph's Thai factory, cutting the factory's workforce in half. In the Philippines, 1,663 workers lost their jobs when the company closed two factories. In all three factories, the majority of the workers who were laid off were union members, including union leaders. The complaint filed by a coalition of NGOs and unions alleges that factory management repeatedly demonstrated anti-union behaviour and that the massive layoffs were managements retaliation in a long conflict with the unions. By not consulting the unions about the layoffs and failing to negotiate a social plan for the workers, the complainants contend Triumph has breached the OECD Guidelines.

Triumph initially appeared to be open to the NCP process, but later refused to enter any mediation meetings in which the issue at the core of the complaint would be discussed. As the case was deadlocked, the Swiss NCP decided to closed the case. In its final statement, the NCP does not make any determination as to whether the OECD Guidelines have been breached by Triumph, nor does it make recommendations to enhance implementation of the Guidelines. Moreover, the NCP refused to hold meetings in Thailand or the Philippines and was also not willing to provide funding to help bring the victims to Switzerland or for translation of key documents. This made the involvement of the local complainants and the victims of the abuses more difficult and hindered their ability to access the mechanism.

The complainants and the Clean Clothes campaign criticise the Swiss NCP for allowing the company’s refusal to negotiate to kill the process without resolution or even a single meeting and raise serious question the willingness of the Swiss NCP to perform its role as an unbiased mediator. According to one of the complainants, Melona Daclan from Defend Job Philippines, “the NCP performed the bare minimum of forwarding the letters between Triumph and the unions, but never made any constructive proposal to facilitate a mediation meeting or to investigate independently the case”.

In light of the pending Update of the OECD Guidelines Joseph Wilde-Ramsing from OECD Watch comments: “The Swiss NCP’s minimalist handling of this case and the weak final statement highlight the urgent need for minimum NCP performance standards to prevent such shortcomings from being repeated in the future. The update of the OECD Guidelines that is currently taking place provides an excellent opportunity for governments to strengthen the guidance to NCPs and improve NCP functioning. Governments must act now to seize this opportunity and make the necessary changes”.

For more information about the case also see the OECD Watch case database.