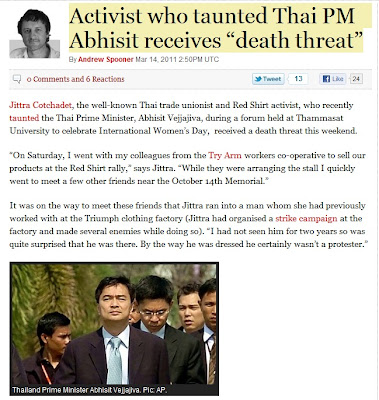 
Jittra Cotchadet, the well-known Thai trade unionist and Red Shirt activist, who recentlytaunted the Thai Prime Minister, Abhisit Vejjajiva, during a forum held at Thammasat University to celebrate International Women’s Day,  received a death threat this weekend.
“On Saturday, I went with my colleagues from the Try Arm workers co-operative to sell our products at the Red Shirt rally,” says Jittra. “While they were arranging the stall I quickly went to meet a few other friends near the October 14th Memorial.”
It was on the way to meet these friends that Jittra ran into a man whom she had previously worked with at the Triumph clothing factory (Jittra had organised a strike campaign at the factory and made several enemies while doing so). “I had not seen him for two years so was quite surprised that he was there. By the way he was dressed he certainly wasn’t a protester.”

Thailand Prime Minister Abhisit Vejjajiva. Pic: AP.
After following Jittra for a short while the former co-worker asked if “you and I should go and talk somewhere else – because this issue will not be easily settled. I will fucking definitely kill you if I see you again!”
Jittra quickly left the scene and reported the matter to a local police station. “The police officer there remembered me from my recent protest at Thammasat against PM Abhisit. He suggested that the threat was unlikely to be connected to my previous union activity or a personal grudge resulting from that and was curious why I was being threatened now. What I would say is that this person making the threat against me has had many opportunities to do so before and never said a word. The timing seems very strange and how did he know exactly where I would be at that time? I have certainly been followed before by Thai security services and usually hang out at the same spots during the recent Red Shirt protests at Democracy Monument. Are they trying to make any attack on me look like a personal conflict?”
While Asia Provocateur is not convinced that a link between the threat to Jittra and her protest against PM Abhisit is concrete, the situation certainly raises eyebrows. Without question, Jittra’s protest against the PM, which involved silently holding up banners that asked “whose hands are covered in blood?” and “he loves talking….”, was very effective, gained a huge amount of attention and left Abhisit looking unusually flustered.
Some sources stated that the PM was apparently incandescent after the protest. But, it’s quite a leap to suggest that he then personally became involved in setting-up a threat against Jittra. However, for security officials lower down the food chain this might have been seen as an opportunity to make a name for themselves. Either way, while Thailand remains gripped in a culture of unaccountable impunity, and with elections this year, we should expect more threats, violence and, unfortunately, some deaths.
asiaprovocateur@gmail.com
เขียนโดย bus4530219 ที่ 00:28